A bench in memory of LSMU patron John Ruane

On October 2, 2015, a stone memorial bench was unveiled in the courtyard of the Veterinary Academy of the Lithuanian University of Health Sciences in memory of LSMU patron John Ruane. It was placed upon the initiative of B. Noreikis, the chief biologist of the Lithuanian Zoological Gardens, with the approval of the LSMU Senate. A group of LSMU community members, guests, and friends participated in the bench unveiling ceremony.

John Ruane was born on October 3, 1952. He studied business management and advertising in Cheshire, England. In 1990, Ruane founded the animal welfare organization Naturewatch in Cheltenham, Gloucestershire, England, and founded the charity Naturewatch Foundation, which he managed until 2013. The organization developed animal welfare activities in the United Kingdom, Ukraine, Romania, Australia and Lithuania, which included educational activities, organization of events and campaigns.

Ruane came to Lithuania for the first time in 1994 and fell in love with this country and its people.

A fighter for animal rights, Mr. Ruane worked to limit the use of animals for commercial purposes, entertainment, and experiments, revealed the facts of criminal treatment of homeless animals, initiated their care and control in Eastern European countries, and proposed tightening laws on cruel treatment of animals. Thanks to the organization led by  Ruane, a law came into effect in the United Kingdom limiting the transportation of animals for no longer than eight hours. In 1996, Ruane organized a protest campaign in 110 supermarkets in order to limit the sale of goods that are tested on animals. He helped to improve the conditions of keeping live fish in Lithuanian food stores and the long-distance transporting of farm animals. The foundation financed an investigative trip to draw attention to the bad conditions of long-distance horse transportation from Lithuania to Italy.

The organization led by Ruane repeatedly provided material assistance to the former Lithuanian Veterinary Academy (LVA) and other institutions: it sent medicines and equipment for LTL 70,000 to veterinary clinics, the Lithuanian Zoological Gardens, the Lithuanian Maritime Museum, and the Kaunas Animal Shelter. In 1995, a horse trailer for transporting large animals was donated to the Academy for LTL 13,500 including medicines, instruments, and other equipment for LTL 40,000. Ruane organized and sponsored a week-long internship of seven LVA instructors at the University of Edinburgh in Scotland. In 1998, LVA received 223 kg of medicines to treat homeless animals. In 2005, the foundation supported the opening of a scientific reading room at the Veterinary Academy. For his financial support to LVA and the Lithuanian Society for the Protection of Animal (LiSPA) in 2002, Ruane was awarded the honorary title of Patron of the Lithuanian Veterinary Academy.

In 2003, while Ruane was in Lithuania and saw how widely celebrated World Animal Day was, he had the idea to create a website for this occasion. The website www.worldanimalday.org.uk unites like-minded people around the world to this day.

The Foundation supported the activities of LiSPA: financed the establishment of the central headquarters in Kaunas, reconstructed the LiSPA Kaunas Branch Animal Shelter, improving the conditions for the animals, and established the Zoo School at the Lithuanian Zoological Gardens. For seven years, the Foundation financially supported the LiSPA Wild Animal Rescue and Rehabilitation Center, which aided sick, injured and orphaned wildlife. Supporters of the Naturewatch Foundation paid for the strayed to Lithuania pelican’s airline flight back to Greece, its return to the wild, and television coverage of the ordeal. Ruane supported the participation of Lithuanians in animal welfare conferences in Budapest and Bratislava. In 2002, for his services to animal welfare, the State Food and Veterinary Service (SFVS) awarded Ruane the medal of St. Francis. In 2008, Ruane was honored at the LNK TV award “Golden heart” for his activities in Lithuania. Ruane’s organization has worked for several years on the drafting of the animal protection law in Ukraine, improving the living conditions of homeless animals in Kyiv.

Ruane died on December 3, 2013.  The memorial bench commemorates Ruane’s consistent animal rights activities, his dedication to animal welfare, and all the good work that Mr. Ruane has done.

Information of the Museum of the Veterinary Academy of the Lithuanian University of Health Sciences. Prepared by L. Baršauskienė. Photographs by J. Jonikienė, B. Noreikis, T. Šileikis, J. Morkūnas, L. Baršauskienė. 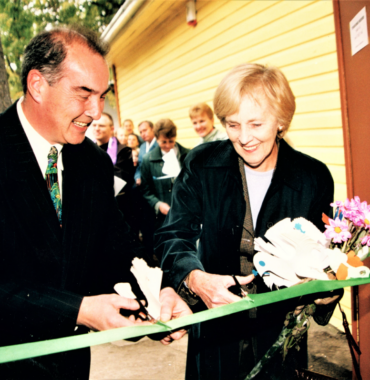 Ribbon-cutting ceremony at the opening of Zoo School at the Lithuanian Zoological Gardens.  John Ruane and First Lady A. Adamkienė,  2022-10-04 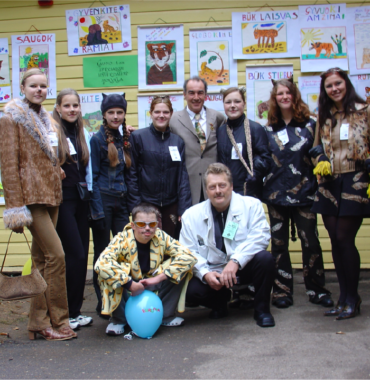 J. Ruane (center) with the organizers of the World Animal Day celebration at the Lithuanian Zoological Gardens. 2005 10 04 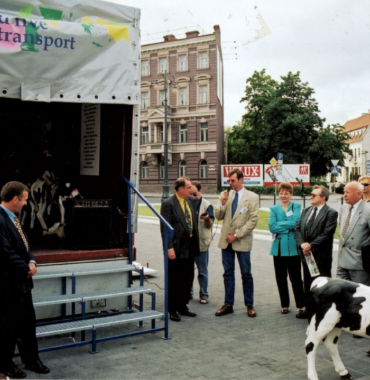 2008 Campaign in Vilnius – “Stop Long-distance Transport of Livestock”. The participants are representatives from the UK organizations Compassion in World Farming, Naturewatch, LiSPA, LVA and the SFVS. 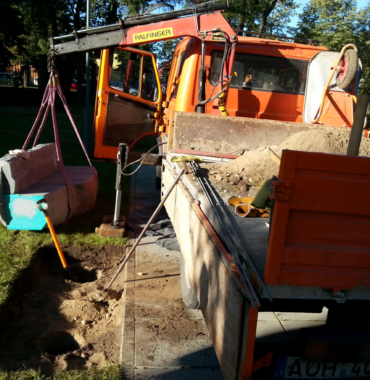 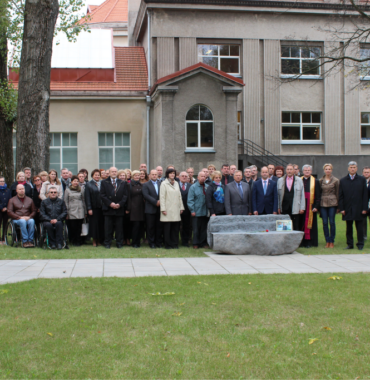 Participants of the bench unveiling ceremony: members of the LSMU community, guests and friends of J. Ruane. 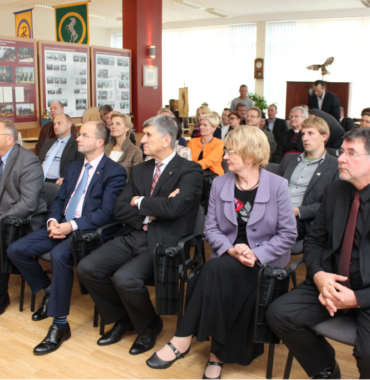 Gathered to share memories of J. Ruane at the Museum of the Veterinary Academy of LSMU. In the first row from the left: professors A. Sederevičius, V. Bižokas, R. Žaliūnas, H. Žilinskas, A. Aniulienė. On the far right – long-time friend of J. Ruane, B. Noreikis. 2015. 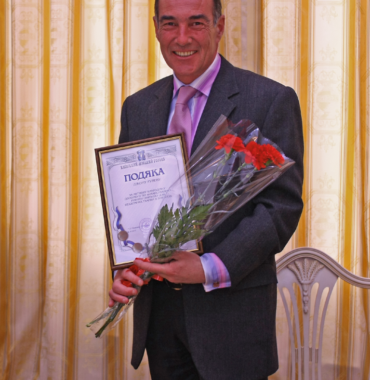 J. Ruane was awarded the appreciation of the Mayor of Kyiv for financial assistance to homeless animals. 2011 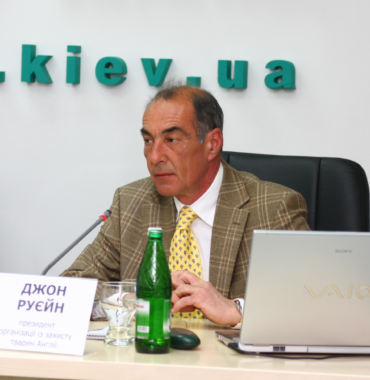 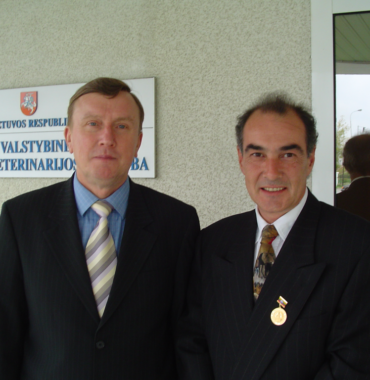 J. Ruane with the director of the State Food and Veterinary Service K. Lukauskas. 2007 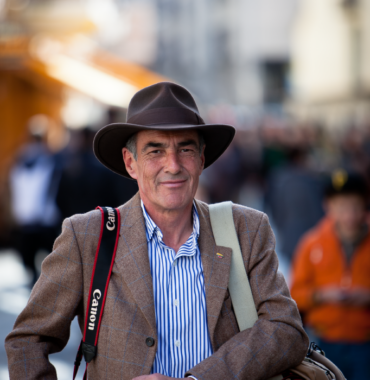 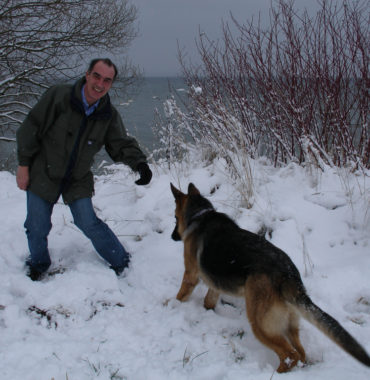 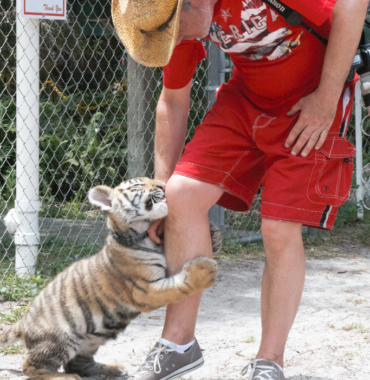 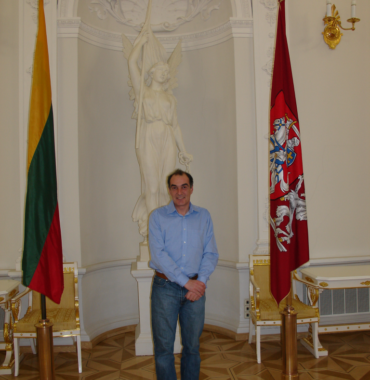 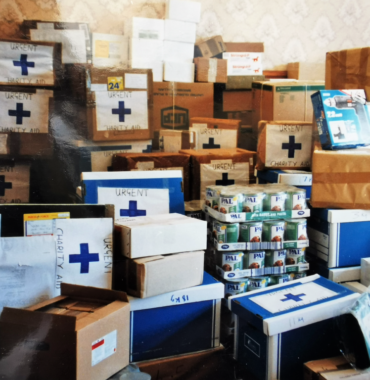 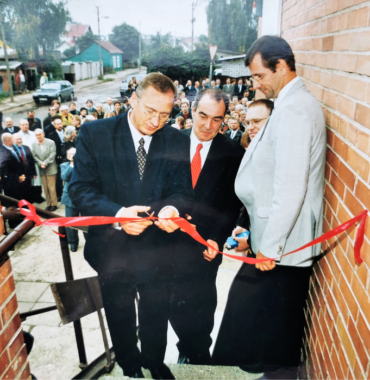 Opening the central office of the Lithuanian Society for the Protection of Animals. The ribbon is cut by LVA Rector Prof. V. Bižokas, center – J. Ruane, on the left – LiSPA Chairman B. Noreikis. 2001-10-04 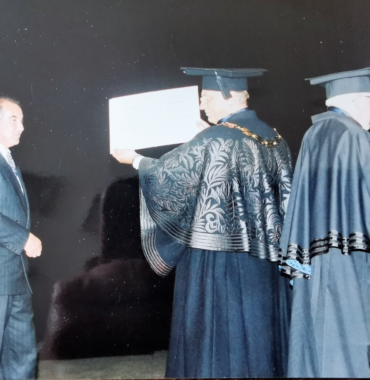