The history of the Vytis’s Horse monument

The author of the monument, J. Rutkauskas (1907 – 1998), was born in the village of Gustonys in the Panevėžys district; Rutkauskas studied at the Panevėžys gymnasium (grammar school), where drawing was taught by the sculptor Juozas Zikaras. The talented student was offered by his teachers to study at an art school, but Rutkauskas was attracted to technology. As a child, he created a mechanism to turn windmills, which he installed in his parents’ homestead. This was his first invention. Rutkauskas studied technical drawing at the Kaunas Higher Technical School. In 1929, the young man began his military service in the 1st Hussar Regiment of the Grand Hetman of Lithuania, Duke Jonušas Radvila, a cavalry training unit. After completing it, Rutkauskas obtained the rank of corporal, was awarded a silver watch, and was offered to remain in the training squadron of the regiment. Rutkauskas liked the service, so he stayed in the regiment and received the rank of sergeant. Rutkauskas built the Lithuanian formation saddle, improved the horsemen’s armour, painted pictures about the life of hussars. Later he invented various equipment in the fields of light industry, medicine, and agriculture.

Rutkauskas had a dream – to create a monument.  He had put together a horse sculpture made of moss and wood, which decorated the Gaižiūnai training ground, but while transporting it to Kaunas, a piece fell apart.  Then the commander of the regiment, Colonel of the General Staff of the Lithuanian Army (son-in-law of President Antanas Smetona and a former personal adjutant), Aloyzas Valušis, suggested that Rutkauskas make a concrete horse project.  Since the project implementation costs were small, Rutkauskas obtained a permission to build a concrete horse. He moulded the horse with the help of the soldiers, day and night, despite the autumn weather, without receiving any reward. The sculpture, which is about one and a half times the size of a natural horse, was modelled after his own horse named Greitas (En. Fast). On Christmas Eve, 1936, the monument was ceremonially unveiled and consecrated. The regiment commander gave the monument the name Vytis’s Horse, thanked the dedicated author Rutkauskas: Art develops spiritual strength, which is as necessary for a warrior as physical strength. It is an honour for us to have artists among us. Such people need to be appreciated and understood.

The sculpture was created as an expression of respect and love for the horse, symbolising strength, courage and drive, loyalty, and friendship. Vytis’s Horse, which stood in the barracks on Radvilėnai road, was the pride of the 1st Hussar Regiment during the interwar period.

Like many symbols of independence, the monument was demolished during the Soviet occupation. Around 1960, V. Šarkūnas, professor of the Department of Infectious Diseases of the Lithuanian Veterinary Academy (1926 – 2015, at that time associate professor of the Department of Obstetrics and Parasitology of LVA), while visiting his relatives in Žaliakalnis, noticed a discarded, dilapidated horse sculpture in a garbage dump near the barracks’ fence, and told to the then vice-rector of the Academy for Economy and Administration F. Miliutis about it. The leaders of the Academy decided to save the concrete horse from destruction and place it in the grounds of the Academy. They found the vehicle to transport the sculpture and the funds to buy it back. The teachers of the Academy, former military personnel, were proud of this idea. The author himself was invited to restore the monument, who was particularly happy with the preservation and revival of the sculpture and was assisted by students. Soon, a long-standing tradition was formed – almost every graduate, student or guest of the Academy has a photo in their personal archive next to the legendary monument commemorating Lithuanian cavalrymen.

The monument that has been decorating the town for more than 60 years is an integral part of the Veterinary Academy, the pride of the Viljampolė community, a symbol of freedom, courage, and friendship.

From 20 April 2022, the sculpture is a state-protected real heritage object. 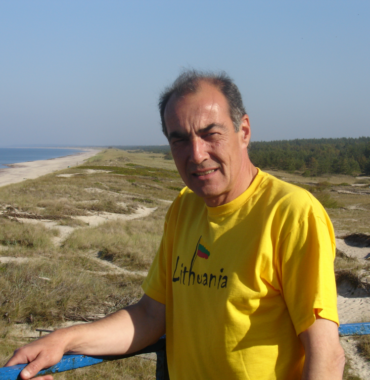 The creator of the monument Jurgis Rutkauskas with his horse named Greitas in training, 1930-1939. Photo of the Museum of Veterinary Academy. 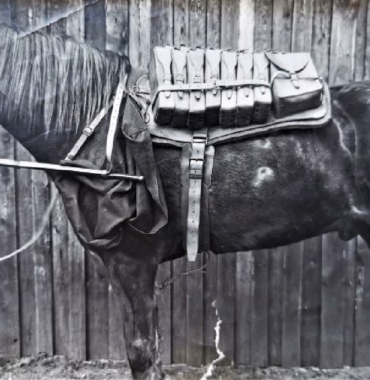 Equipment for transporting ammunition on a horse, designed by Jurgis Rutkauskas, 1938. Photo of the Museum of Veterinary Academy. 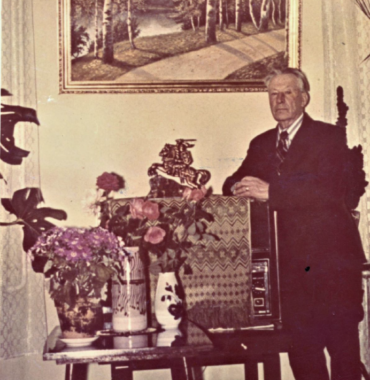 The author of the sculpture, J. Rutkauskas, in his home. Photo of the Museum of Veterinary Academy.