Department of Histology and Embryology

The Department of Histology and Embryology has three microscopy laboratories for students. During practical work, each student uses an Olympus binocular microscope and a large collection of histological preparations. For educational purposes, each laboratory is equipped with imaging equipment that allows interactive study and analysis of microscopic images of material.

More than 100 exhibits are accumulated in the Embryology Museum of the Department. These are aborted embryos at various stages of development, as well as embryos with various developmental disorders. In addition, the museum has preserved a collection of old microscopes that were used by students at different times.

ABOUT THE ACTIVITIES OF THE DEPARTMENT

The professors of the department teach in elective courses, supervise students’ scientific works and participate in doctoral studies.

The most important directions of scientific research carried out by the employees of the Histology and Embryology Department are: 1. Direction of scientific research in experimental oncology, using two models: a. A chick embryo chorioallantoic membrane (CAM) model for studying tumour-induced neoangiogenesis, tumour cell invasion and proliferation; b. A model of spontaneous tumours after urethane injections in the lungs of Balb-C mice; 2. Age-related changes in the male and female reproductive systems.

CAM and spontaneous lung tumour models used for experimental studies are suitable for testing the effects of various drugs on tissues, elucidating their influence on angiogenesis, tumour cell proliferation and invasion. In the Department‘s newly established Live Tissue Research Laboratory, experimental research is carried out, forming tumours from cultured cells. Immunohistochemical, in vivo biomicroscopic, histomorphometric studies are performed at the department.

The lecturers of the Histology and Embryology Department are members of the Lithuanian Society of Morphologists, who actively participate in national and international scientific conferences, where they present the results of ongoing scientific research. 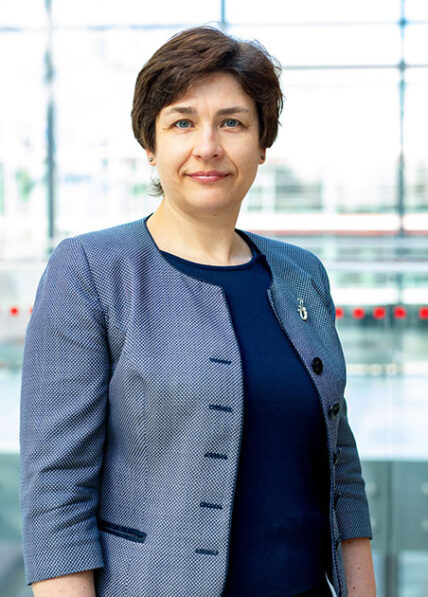